How to use Bitcoin in Online Casinos 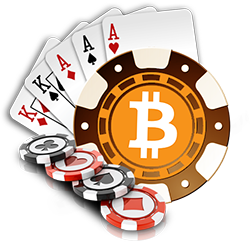 More and more online casinos add Bitcoin to their list of payment options and some are even launched as Bitcoin-only sites. Either way, players benefit in multiple ways. If you’ve been staying clear of digital currencies fearing they’re too complicated to work with, you’re not alone; many of us prefer to stick to proven payment methods we’ve been using since before Satoshi Nakamoto began working on the concept of a peer-to-peer electronic cash system (which, by the way, was back in 2007). There’s no reason you should be missing on benefits offered to Bitcoin depositors so don’t let ignorance stop you. Keep on reading and you’ll soon feel confident enough to make your first cryptocurrency payment.

Fiat currencies like Dollar or Euro are issued by centralized authorities that have ultimate control over their supply and distribution. The government can print as much money as they want, thus decreasing its value and potentially causing inflation. There’s no such thing where Bitcoin is concerned and that’s why you’ll see the digital currency referred to as a decentralized currency. Bitcoin is issued and its distribution managed by a network rather than a specific institution. Furthermore, Bitcoin has a fixed number and no more will be created after 21 million bitcoins have been mined; the principle of scarcity protects it from inflation.

400+ games and a 97.76% cashout ratio
HUGE and fully cashable bonus offers
Designed with a focus on Australia in mind

Pokies powered by Rival and Realtime Gaming
Live Dealer Games and Poker
Attractive 100% Match Bonus of up to $1,000

The History of Bitcoin

By now everybody and his brother “knows” that Bitcoin was invented by Satoshi Nakamoto, but did you know that no such person was ever proven to exist? People are still attempting to figure out who the individual (or a group of individuals) really was and some have tried to take credit by (unrightfully) claiming ownership. Interestingly enough, one of them was an Aussie named Craig Wright.

While the real father of Bitcoin still remains unknown, we do know that whoever presented themselves as Satoshi Nakamoto was not the first person to come up with this revolutionary idea. All earlier attempts have failed because their authors couldn’t find a satisfactory solution to a so-called „double spend problem“. Let us explain. If you were to use a 10 AUD bill to pay for a product, you’d hand over cash to the merchant and would not be able to pay with the same bill elsewhere. But when it comes to digital money, transactions could be copied and money spent twice – that is, unless there was a verification mechanism as reliable as the seller who took your 10 AUD bill.

Two months after the domain name bitcoin.org was registered (which happened in Aug 2008), Nakamoto published a paper explaining how Bitcoin solves the problem of double spending. He came up with a confirmation mechanism and crafted a chronologically-ordered, time-stamped ledger (blockchain). The system makes it possible for the currency to change ownership only once the transaction has been confirmed by the Bitcoin network. Blockchain generates „a computational proof of the chronological order of transactions“ and at the same time enables the ledger to be both publicly visible and verifiable without revealing private information to anyone except for individuals involved. So how does this take care of the aforementioned problem? If you were, for example, trying to pay with a single 1BTC twice, both transactions would go into the same pool of unconfirmed transactions but only the first to arrive would be verified by miners. The other remains unverified and thus can’t be executed.

There was hardly a better moment to launch Bitcoin. You may remember that in 2008 one of the worst financial crises first hit the US market and later on spread to Europe. Trust in institutions (and subsequently fiat currencies) was shaken and people were ready for an alternative payment option which puts them fully in control of their own funds.

Digital coins are created by miners who use powerful computers for solving complex equations (the so-called cryptographic hashes). Every time they successfully solve one, they „mine a block“ and are rewarded by a set amount of new bitcoins. This is the only way bitcoins can be created. The mining difficulty (a measure of how difficult it is to find a hash) is designed so that blocks are found and new bitcoins created on average every 10 minutes.

Miners are also the ones verifying transactions and keeping the Bitcoin network secure. To be able to send and receive digital currency, one needs to have a Bitcoin wallet. Unlike your physical wallet used for storing bills, this one is essentially a collection of two keys – a public key (the address) and a private key, rather than a place in which to keep digital coins. When sending bitcoins to pay for a product or a service, both parties will have to know each other’s addresses since they serve as a public identification tool. The private key, on the other hand, is an identifier which allows the user to access their account and is known to nobody else. The key is used to digitally sign a transaction before it gets broadcasted to the entire Bitcoin network.

Miners will check whether the digital signature is correct, and if so, confirm the transaction by creating the next block. What happens is that all previous transactions to and from your address are scanned to calculate the balance. If you’re trying to spend more than the calculated balance, the network will reject the transaction. Otherwise, it will be confirmed and a new block created. At this point, the transaction has one confirmation. About ten minutes later, a new block is created and the transaction reconfirmed by the Bitcoin network. Though six confirmations is a kind of a standard for a transaction to be considered secure, some merchants will be happy to see it confirmed only once.

How to Start Using Bitcoin in Online Casinos

The very first thing you’ll need to do is get yourself a Bitcoin wallet. There are different kinds of wallets and each comes with its own set of advantages and disadvantages. Hardware wallets are physical devices built for generating Bitcoin private keys offline. Ledger Nano is an example of a smartcard-based hardware wallet. A random 24-word seed, which is generated upon setup, should be backed up by writing it down on a piece of paper. The latter is necessary because in the event of damage or loss, you can recreate the entire wallet with the seed. Users also have to select a PIN code which will protect them against theft and hacking. TREZOR is another hardware wallet but it comes in the form of a small computer. Users can add a passphrase to the 24-word seed for extra protection so that even if someone gets hold of their seed, they still wouldn’t be able to access funds. At the same time, you have to make sure not to forget the passphrase since both are needed to be able to send and receive Bitcoin payments. Hardware wallets are considered to be the safest since they’re kept offline and there’s no risk of online theft. Even if a hacker steals the hardware wallet itself, they won’t be able to use it without a PIN code.

While hardware wallets are referred to as „cold“, wallets running on devices connected to the internet are considered to be „hot“. Software wallets are apps one can download to their phone, computer or tablet. Bitcoin Core, Armory and Bitcoin Knots are a few software wallets you can download and install on your computer, and BitPay, Coin.Space and BTC.com mobile wallets which support both iOS and Android devices. Online bitcoin wallets, such as BitGo, BTC.com and Coin.Space, store private keys online and can only be accessed with a password. They run in your web browser same as any other website. Software wallets are a convenient option for those who are making frequent Bitcoin payments and some will allow you to access funds across multiple devices. But, because they generate private keys on an internet connected device, they’re not considered to be 100% secure.

Even though bitcoins are not really stored in your wallet, they are protected by it. The level of security offered by a particular wallet is therefore very important. If you intend to use it as a savings account (or store large amounts), you’re advised to use a hardware wallet. Software wallets are a good solution for an online player who’s frequently depositing and withdrawing smaller amounts, and unlike hardware wallets, they’re free.

Having set up a wallet, you need to go to a Bitcoin Exchange and buy yourself some digital currency. BTCMarkets is one of the largest Australian BTC and ETH exchanges, 100% privately Australian owned. The exchange enables you to trade with other users and buy Bitcoin at the price which is influenced by the demand and supply. Click on “Account” then “Deposit” to see a list of depositing options and then transfer funds to purchase bitcoins with. Once your deposit has cleared, click on “Buy” and enter the amount and the price you’re willing to pay. BTCMarkets has small or even non-existent deposit/withdrawal fees. Bitcoin, Litecoin, Ethereum deposits and Australian bank transfers are free, while POLi deposits cost $3.30.

Independent Reserve is another Australian-based multi-cryptocurrency exchange. The company is a Gold Certified member of the Australian Digital Commerce Association and uses a proprietary Airmarshal platform to provide a secure system for online trading. You’ll need to create an account and validate your identity, deposit funds via Electronic Funds Transfer, and once your account is funded, follow prompts to buy Bitcoin which can be kept at Independent Reserve or withdrawn to your own Bitcoin wallet. Deposits of $AUD 100 and above are free while smaller deposits incur a $0.99 processing fee.

Setting up a wallet and purchasing digital currency may be considered the most difficult part of the entire process. As long as you find a reputable online casino willing to accept Bitcoin, deposits and withdrawals are dead easy.

To fund your casino account via Bitcoin, you’ll need to do the following:

The withdrawal process is not all that different:

Once the casino operator reviews and approves your payout request, funds should appear in your digital wallet within 15 minutes. How cool is that?

Online casino operators favor cryptocurrencies over most of the alternative options mainly because of low costs. They’ll try to convince new members to use them by offering Bitcoin depositors a more generous welcome package, imposing smaller minimum and higher maximum deposit/withdrawal limits, and processing transactions free of charge. They’ll also emphasize the fact that, following the payout approval process, bitcoins may end up in your wallet in as little as 15 minutes. The latter has nothing to do with operators, obviously, that’s just how digital currencies function. Still, it’s an important advantage over credit cards, eWallets and other payment options.

Bitcoin provides a number of other advantages:

All about the money