Mega Moolah is the most popular progressive jackpot pokie in the world, and it regularly makes the news with huge jackpots that sometimes exceed 10 million! A quick Google search will reveal dozens of sites recommending that you play Mega Moolah.

You might be better off just visiting Bitstarz and finding a nice game to play, rather than chasing Mega Moolah millions you, unfortunately, aren’t eligible to win.

Aussies can’t play Mega Moolah, at least not to win the jackpot. In other words, even if you’d make thousands of spins, there’s no way that this would contribute to the chances to win the jackpot because it simply won’t be triggered. Or, worse, if you do manage to find some loophole and play to trigger the jackpot game – you wouldn’t get the money because you’re ineligible if you’re an Australian citizen.

New Zealand is a different story, in case you wondered. Kiwis can play Mega Moolah with no issues. So can UK residents.

How to play Mega Moolah from Australia?

Make no mistake about this – you can NOT win the Mega Moolah jackpot as an Australian resident. No matter what someone else might say. Ok?

Same goes for other Microgaming progressive jackpot slots such as Major Millions and King Cash-a-lot. Forget about these. Playtech is also a company that runs away from all but the most regulated of markets, so their pokies Beach Life, Funky Fruits and Gladiator are also out of the question. NetEnt? Forget about it.

What you want to focus on are progressive slots by other developers, so we prepared a detailed review of Australian progressive jackpot pokies.

Are jackpot pokies worth playing?

The jackpot winners will tell you it’s so worth it, and everyone else will have different theories.

But to find the answer we have to dig a bit deeper, as actually the answer depends on which exact pokie are you playing. For every single one of them, we can open a case and then finally react a verdict – but it would be impossible to give a blanket answer.

For example, Mega Moolah is definitely worth playing as it’s a provably fair game with jackpots that reach 10 millions or more, the winners do get paid out, and the jackpot is won regularly. Most NetEnt progressive slots are also worth playing.

What you don’t want is a progressive jackpot slot that has a jackpot that can only be won when playing the maximum bet, as that’s a really expensive lottery ticket. 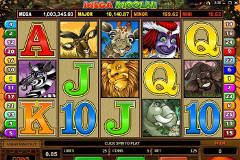 Mega Moolah is a pokie released by Microgaming way back in 2006, so it belongs in the first generation of online slots. The innovative idea of an online progressive jackpot caught on immediately, and still shows no signs of stopping as no other game managed to reach these jackpot values.

In 2012, a mobile version was released. To keep the game interesting for long-time players, new versions of the game were introduced, such as Mega Moolah Isis that has an Ancient Egypt theme.

Mega Moolah is a 243 ways to win game played on a standard 5×3 board, though pretty much no one cares about the game itself. The purpose of the game is to simply give you back enough money so you can play even more spins and increase your chances to trigger the jackpot game.

How to win Mega Moolah jackpot 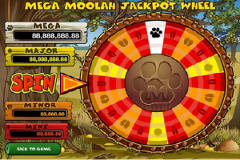 This is how Mega Moolah is played – you deposit a certain amount, say $100, and that’s enough for a hundred $1 spins. But since the game is paying back, you’ll probably end up making a lot more spins, at least 300 (if very unlucky). That’s 300 tickets to win the jackpot.

The larger the bet size, the higher the chance of triggering the jackpot wheel game (pictured on the left). However, there’s no precise info on this so we don’t know if the max bet doubles the chance or perhaps just increases it a bit, or if playing with a minimum bet is a viable strategy at all.

When the jackpot game is triggered, it can award one of four jackpots – Mega, Major, Minor or Mini. Many people are inevitably left disappointed when they do trigger the jackpot game but don’t win millions, but that’s just how the game is set up. A jackpot game doesn’t guarantee a Mega jackpot win. You need to be lucky twice in order to win it.

So far, there have been four winners from Australia (highlighted below), and four winners from New Zealand. The count of Australian winners isn’t likely to increase anytime soon, as the prerequisite for that would be a change of the recently tightened online gambling laws.

Since Mega Moolah jackpot can no longer be won from Australia, and you’re denied access to other Microgaming pokies as well, the field has really thinned.

You’re down to progressive pokies of questionable quality, and for most players it would perhaps make more sense to simply go play the normal non-jackpot slots that pay well, in online casinos that give you a nice welcome bonus.