Classic Pokies – What are they? Where to Play them in Australia?

Classic pokies aren’t going away – they’re the unsung hero of gambling. While new pokies come out all the time with their flashy graphics, stunning animations, sounds and gameplay, sometimes all we need is some old-fashioned true casino fun with classic pokies. Many Australians play classic pokies only!

What are classic pokies?

Opinions differ about the number of reels (more on that later), but the classic pokie is expected to have the symbols such as Cherry, Diamond, Seven, and the unforgettable BAR. Maybe a Joker on the side. Some symbols may be card symbols such as Ace, King or Queen. In short, classic pokies don’t use any other symbols but the most recognizable ones.

Most people, when they use the term classic pokie, are referring specifically to the three-reel game. Others will accept a five-reel pokie too, as long as the rest of the game fits the description of a classic pokie.

In the rest of the world, outside Australia, the term classic slot may refer to any simple five-reel game with that old casino feel. It usually doesn’t have fruit symbols, but uses card symbols plus very flat and low-resolution colorful symbols. Usually this type of pokie has high variance, a free spins round and another bonus round. But, in Australia, this is not what we refer to as a classic pokie.

Why are classic pokies so popular?

Players usually want to see familiar symbols, as after all, they’re putting their money in this game. It’s easier to understand the game mechanics if it uses the same setup known to all. There’s something attractive in that old school design that doesn’t need to change because it stands the test of time.

To add to this, many players have had very pleasurable nights out while playing classic pokies in a casino, and want to replicate that feeling by playing that exact type of pokie again.

Are classic pokies any good?

It depends. You have to pick and choose a quality classic pokie, otherwise you may be playing a game that doesn’t really pay well as the developers know a player may automatically assume a pokie is paying well if it’s a three-reel classic pokie. That’s just not always the case.

We have to make a distinction between classic pokies you play in a brick-and-mortar casino, and the online classic pokies that took that heritage and replicated it on your desktop or mobile device.

With the ‘real’ classic pokies, you don’t actually know the theoretical payout, and therefore you can’t know if the game is paying well or not. Online, you can be much more confident as online pokies use a random number generator and are audited for being provably fair. That’s the key. Do play classic pokies, but play them exclusively online. They’re superior.

How to recognize a good pokie?

These two things matter the most, and by playing the pokie you’ll get a feel for the variance (low, med or high) and the win frequency. In short, the game must be balanced right. It must give you enough small wins to keep you going, but it must be able to pay that mega win!

What are the best classic pokies available to Australians?

We’ll stick to online pokies here for the above reasons. Their payout values can be quantified and these pokies, unlike their ground casino counterparts, are never rigged because they can’t be. 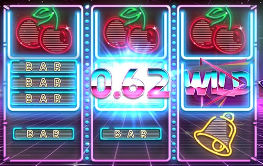 Let’s use Betsoft’s release Total Overdrive (shown above) as an example of a three-reel pokie, though it uses a futuristic neon rendition of classic symbols. It has RTP of 96.92%, which is amazing, and is a superb pokie to play if you want a new three-reel pokie you haven’t played before. It has incredible win multipliers! You can play it at Bitstarz casino.

Fruit Bat Crazy is a five-reel classic pokie with fruit symbols that doesn’t have a really good payout, and Jumbo Joker is a classic pokie through and through. It has a Joker and two levels of play. Again, not a very good payout.

We have to go back to one of Betsoft’s earliest releases, Lucky 7, to find a three-reel classic pokie with fruit symbols. It has excellent theoretical payout, 97.00%. You can play it at Bitstarz casino, just like all the other Betsoft pokies mentioned above.

We do recommend playing Betsoft pokies as they’re the best of the best, even if Realtime Gaming and Rival – two other brands available to Australians – also have their own three-reel pokies. Betsoft’s are better so stick with them.

And now we come to the most important part – how do you actually win on classic pokies?

Well, you’ll take care of most things by simply choosing the right pokie. That means you’d have to play online in order to ensure a fair game, and you’d choose one of the high-payout classic pokies from the best pokie developer available to Australians, which is Betsoft. The two best classic pokies they made are Total Overdrive and Lucky 7.

If you choose some other pokies, it will be difficult to win.

Some players like to use a betting system, which means they increase their bet slightly after a losing spin, and this may prove fruitful at times though we always recommend just letting the pokie do its thing. You will either catch it at the right time or you won’t.